The original plan in 2010 was a call-in show at 10am on Saturdays on one radio station in Atlanta. Michael Bull was going to take calls and answer multifamily and commercial real estate questions.

However, a month before the first show, Salem Media called and said they were renovating new studios, so the show had to be recorded. That meant rather than just taking calls to answer questions, Michael had to come up with new content each week. While that was much more work, it turned out to be a benefit to the industry. What could have been a show only interesting to the local market, became a show interesting to participants of commercial real estate all over the country. The value of the content for people all over the country caused the show to eventually grow to 47 radio stations and become America’s Commercial Real Estate Show.

The first show topic, October 2, 2010, was commercial loan workouts. From day one the show was also produced as a podcast. When the podcast audience grew larger than the radio audience the show eventually left the radio stations to focus on growing its reach in the rapidly growing podcast space. In the last 12 months the podcast version of the show was downloaded over 600,000 times. 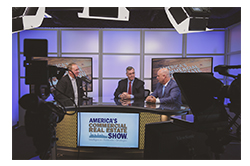 While recording at Salem Media, the producer started videoing the show. People would reach out and say the content was amazing, but the video quality was terrible. Producing video in a tight radio studio with bad lighting was not ideal. In 2014, the show built a news station style TV studio in Bull Realty’s headquarters and stepped up the production quality. The soundproof studio has a custom news desk, three cameras, professional lighting and professional audio and video equipment. The show’s YouTube channel has now has over 8,000 subscribers.

One of the reasons the show has continued to gain popularity is the valuable content and the show host. Show host and executive producer, Michael Bull, has a professional and affable style quick to anticipate and adapt to what the show’s audience wants next. He is a sought-after speaker at national real estate events and has even done standup comedy.

He knows commercial real estate. Over his 35-year career he has brokered over $6 billion in multifamily, office and commercial sales. He is a licensed broker in nine states and leads a successful commercial brokerage firm, Bull Realty. The firm has teams specializing in each property sector which keeps him on top of the various property types.

Producing a show of this caliber takes a lot of work. The goal is for each show to be better than the week before. The show is known for providing valuable takeaways for U.S. commercial real estate participants.

The show celebrates ten years today! A new show has been produced every week since 2010. Michael Bull says the high fives go to the show’s producers, staff, audience and guests. The shows guests include the industry’s most respected commercial real estate economists, analysts and market leaders in the nation.

Show topics and guests are announced to over 9,000 current subscribers via the shows weekly email show topic notification. You can sign up to receive these notifications on the show homepage.

The show is available wherever you get your podcasts or on the show website www.CREshow.com.

Have you heard how Michael closes the show each week? Until next week, be sure you lead, learn, and laugh, and join us for America’s Commercial Real Estate Show.