Office Race to Recovery is Tough to Call

At the end of Q2, the race to recovery for the U.S. office market is hard to call. With uncertainty about the job market and some surprise conversion, the Q2 numbers aren’t exactly the best indicator for where the office sector will end up in 2016. However, here in Atlanta vacancy is down and rents are soaring.

“At this stage of the economic recovery, the markets at the top are slowing a bit while the laggard markets are starting to catch up,” said Ryan Severino in REIS’ Q2 Preliminary Trends report.

It is no secret that the office market is heavily dependent on the labor market, but recent job reports have been a little ambiguous. “The key issue is whether or not May's weak job creation figure was an anomaly or the start of a trend,” he said.

May saw a “weak figure” of 38,000 new net jobs. However, June job gain figures were surprisingly strong at 287,000, the highest monthly rate since October 2015 according to the U.S. Bureau of Labor Statistics and the unemployment rate is 4.9%, down from 10% at the height of the recession.

“When May’s jobs report showed weaker than expected job growth, we heard the predictable claims that the economy had come to standstill, that American businesses and workers were doomed. And it has been the case each of the eight times since 2011 that the numbers have come in below 100,000. Each time, the Eeyore caucus has declared that the sky is falling. And each time, they have been wrong,” said Secretary Tom Perez on the U.S. Department of Labor blog.

Severino called the next few months “pivotal” for both the job market and the office sector in general.

According to REIS, the national vacancy rate declined by 10 basis points to 16% in Q2 due to an unexpected “spike in conversion activity,” most of which is due to Citigroup buying their 2.4 million SF headquarters building in New York, which removed it from competitive inventory. Were it not for this, the national vacancy rate would have increased.

“All in all it’s a pretty good year,” said Walter Page, Director of Research with CoStar, who recently joined us on The Commercial Real Estate Show to discuss the office market.

Page mentioned the shift to nice, newer space. Specifically, the Class A segment is getting more than double the net absorption of other classes. Even though only accounting for 1/3 of the market space, 64% of net absorption is Class A office. He also said that CBDs are still outperforming suburbs. The average quoted asking rental rate in U.S.’s CBD was $30.36 and $22.08 in the suburban markets at the end of Q2, reported CoStar.

Net absorption was 5.4 million SF during Q2, which is less than half of the net absorption from Q1 and the lowest level since Q2 of 2014. Year-over-year numbers are a little more encouraging. Net absorption is 45.9 million SF over the past 12 month. This is a slowdown from 50 million SF YOY in Q1. However, Q1 represented the highest 12-month net absorption total since 2007. “The labor market's performance will be of paramount importance to net absorption over the next two quarters,” said Severino.

“In Class A buildings in core submarkets the leverage is definitely on the landlord’s side as occupancy rates have climbed. Landlord concessions and tenant improvement allowances are down and rates seem to keep climbing while demand is strong,” said Sean Williams, VP of the National Office Group with Bull Realty.

For the Atlanta office market in general, Q2 vacancy decreased to 18.9%, down 50 basis points in the quarter and 80 basis points year-over-year. The city ranked 7th for 12-month asking and effective rents, which grew 4.6% and 4.7% respectively. In fact, Atlanta tied Seattle for 12-month asking rent growth. In Atlanta, average effective rent for office was up 1.6% in Q2 to $18.72 per SF, reported REIS. 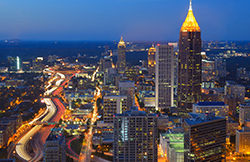 The average quoted asking rental rate in Atlanta’s CBD was $22.38 at the end of the second quarter 2016, and $21.17 in the suburban markets, reported CoStar.