The Trump Card: Expectation vs. Reality 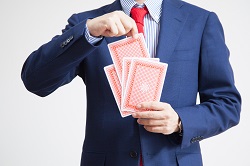 Our new administration is ambitious to say the least. I recently spoke with George Ratiu, Director Quantitative & Commercial Research with NAR, on The Commercial Real Estate Show about commercial lending trends. With Donald Trump as President and a Republican-controlled Congress, the expectation was that the White House would be able to more easily work with Congress to enact legislation, as well as the regulatory environment. Based on the stated goals of the administration, we are expecting a lessening in the regulatory burden, we're expecting tax reform in ways more pro-business and also a lessening of the taxation burden on the corporate side. But in actuality, with so many other issues currently on the table, like the Affordable Care Act, it has become obvious that “2017 may not be as successful for the administration as initially anticipated,” said Ratiu.

However, we do have a tax reform blueprint which the House Ways and Means Committee has put forward, which calls for a major impact to the economy through restructuring of the standard deduction. There are some interesting proposals in this blueprint regarding the mortgage interest deduction, Section 1031 and also introducing the idea of immediate depreciation for a lot of new buildings. “It remains to be seen how many of these will turn into reality,” he said.

Obviously, Section 1031 is a very important part of the commercial real estate environment. In an NAR survey from a couple of years ago, close to 50% of NAR members rated 1031 Exchanges as being an important part of their practice. Ratiu estimates that about 80% of members are engaged in these types of transactions, so the fact that there's a blueprint on the table and there are active discussions going on, is likely to lead to changes that could generate a lot of attention.

Ratiu said that NAR is very active in monitoring the discussions on tax reform and expressing members’ experiences to Capitol Hill. While no one can predict the future, NAR is staying tuned to the possible changes. If the 1031 is important to your business and community, the easiest way to let your voice be heard on these issues is to contact your local representative.

The EB-5 program is also expected to be modified. The EB-5 program is one in which foreign investors can invest money into the U.S. with restrictions and certain conditions in exchange for permanent residency in the U.S. It's been referred to as “money for a green card,” but it has been particularly popular with some foreign investors. In addition, it has offered quite a bit of capital for real estate investments over the last few years. There are some conditions and restrictions to the program. For example, the money has to generate a certain number of U.S. jobs and you have to be in the country for a certain period. However, a lot of folks and critics in Capitol on Capitol Hill and throughout the country have been concerned about some perceptions of abuse or perhaps a lack of enforcement. It is up for reauthorization this fall, so obviously there's some sense of a deadline for the program. And there's been discussion about raising the threshold from half a million to a million-dollar investment.

The general theme for the year is, given how much Congress is trying to accomplish and how long their agenda is, all expectations won’t be met.

Above All, Learn from the Past

Even with the last major tax reform in 1986, there was a lot of discussion and a lot of uncertainty for a while and it seemed that nothing was going to go anywhere. And yet, the reform came together very quickly and the changes have impacted the economy and the U.S. overall for quite a few decades.

“The trouble is so much of the tax code is interrelated that I think that, above all, the most difficult things to account for are unintended consequences. So, we have rules we make regulations we try to basically account for all the things we expect might happen. But as we learned in 1986, any change will have unintended consequences economically and very much for on the business side. And I think that's one of the areas which leaves a big question mark going forward,” said Ratiu.