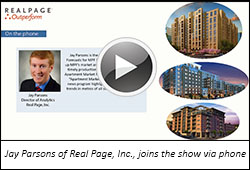 To get a look at multifamily performance and expectations I talked to Jay Parsons, Director of Analytics at NPF Research on a recent episode of the Commercial Real Estate Show. He brought us a glowing report.

“The numbers are just so good, it’s hard not to brag. Twenty-fourteen was an incredible year for the apartment industry.”

“A year ago we were cautious, anticipating a wave of new supply, and indeed, we saw 232,000 units completed, the most since 2000. But demand was incredibly strong, more than 250,000 units absorbed for the nation’s core 100 metros.

“Vacancy ticked down 30 basis points to 4.7% by Q4. Rent numbers were even better: we expected rent growth to level off at 3% but instead it accelerated to 4.6%, soaring close to 2007 numbers.”

If I’d put that kind of rent growth in my proformas, my investors would not have believed it.

Although it’s tough to look ahead, Parsons said NPF could make the case for sustained rent growth around 4.0%, given the multiple indicators of strong demand.

But he noted we’re in uncharted waters: consider that the last few supply peaks were met by recession, and for the first time in over fifteen years we have a lot of supply at the same time we’re getting great job numbers. That’s a promising combination, but it’s measured against uncertainty in the markets.

“Our view is rather moderate. We think occupancy will tick down about 40 bps due to new supply. We’re anticipating even more new units than last year, the most new product since the late 1980s.

“Rent growth is expected to be fairly stable, gently decelerating to 3.6% by the end of the year, still excellent relative to historic norms.”

Across the nation B class assets are the performance standout, with low vacancies and good rent growth. Class A is doing remarkably well despite all the new supply. Even class B properties that were less competitive were great performers in 2014, but these will likely hit some income thresholds this year. Class A’s should begin to feel the impact of oversupply with slowing rent growth.

Investment sales were hot in 2014, making multifamily the crown jewel of CRE. It was the biggest year on record: $112 billion in sales, up 9% since 2013, and 7% above 2007, the previous record. Compared to prerecession, both rent and pricing grew unlike any other sectors.

Everyone thought Cap rates couldn’t get any lower, but sure enough they did. Overall under 6.0%, the lowest in a decade, with garden properties under 6.0%, mid and high rise under 5.0%, and high rises in some the hottest markets in the 3.0%s.

Moving forward we’ll continue to see a supply increase, but it’s tough to know what effect that will have, given the strong demand. Twelve months ago everyone thought interest rates would rise, now this looks much less likely. There is very little pressure on the Fed to increase rates with good demand for treasuries and uncertainty in global markets.

We expect cap rates to be stable, demand high, and spreads good on both the equity and the debt side, all pointing to a good year in 2015.

The wild card is the impact of new supply. Institutions are still saying ‘we want to be in these markets’, but are expanding beyond the ‘Sexy 6’ into the next tier down.  In coastal markets acquisition numbers don’t make sense anymore, so there’s more pressure to develop. We expect long-term demand tailwinds, so construction will continue to ramp up.

The urban phenomenon is hot, but when you look at fundamentals, the suburban story can be just as good.  The key is that all suburbs are not created equal. Don’t underestimate the successful suburb, those comparable to a CBD that have the amenities, retail and transportation in place. Those good suburbs offer better opportunities, if nothing else because of cap rates 50 basis points higher. But their longer-term prospects are excellent since they attract more population and employers, and are likely to have more room to grow.

To get the skinny on REITs I talked to Steven Marks, Managing Director, from Fitch Ratings. 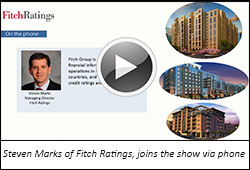 “Multifamily REITs did great last year: the sector index is up 50%, compared to the broader REIT index, up 37%, and the S&P lagging the low single digits.

“We have a very stable ratings outlook – solid liquidity, great access to capital, and steadily improving fundamentals across all asset classes. Plus, we are known for embracing lower risk strategies in our development. The only brakes on this are unchanged leverage; the slow pace of the recovery, and some the uncertainty about interest rates.”

What REIT Investors Should Look For

There are concerns in specific markets about oversupply. In 2015 the multifamily market is expecting delivery of new product at 2.0%, up from average 1.3 in last 15 years. Denver, Nashville, Seattle and Boston may begin reacting to oversupply.

REITs acknowledge that a supply wave is coming; we don’t want to compete with merchant builders.

We try to interplay the shifting sands between home ownership and renting. Sometimes it looks like a zero sum game, but ultimately stronger home ownership hurts the multifamily business, and we anticipate some stabilization.

We do see an overall cultural shift toward later marriage and children, so Millennials need homes later than their predecessors. That’s certainly a benefit.

Fannie and Freddie are big players in the sector, and multifamily REITs’ ability to have higher leverage provides stronger ratings. The GSCs provide us a lot of liquidity. We were expecting a reduction in originations, and a shrinking balance sheet, but that didn’t happen. We don’t envision a significant pullback now.

It could cut a few ways: if interest rates rise due to a stronger economy and growth in employment, that would be great. If they rise in a spike formation, that would have a negative impact, since we have the shortest lease terms in the industry.

If interest increases, cap rates tend to follow, and we prefer that doesn’t happen rapidly.  The correlation among REIT returns is that if Interest rates go up, equity returns go down. But capital chases yield, and REITs are a yield product, so they tend to stay in balance.

Doug Culkin, President of the National Apartment Association, shared what his members were reporting from the trenches last year. He told me about the results of their recent annual Member Survey, which included 3,698 properties. 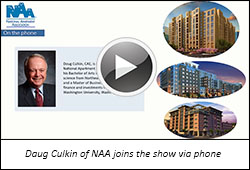 “We try to stay on top of what’s going on with our members.” Culkin said with a smile.  He has a lot to smile about.

“Rents were up 3.7%. How long will this trend continue? Were not seeing indicators it will change soon.”

When asked how owners and managers were achieving these gains, Culkin suggested that owner-operators have become much more efficient at managing and tracking those costs.

“When things got tough in 2008, our members began to look at everything, doing whatever they could to maximize returns. That’s when sharing industry knowledge can really help your business.”

To get the perspective of managers and developers, I asked Philip Tague, the President of AMLI Development to drop by and tell us about his 2014, and what he sees ahead this year.

“This has got to be the Golden Era of apartment ownership. For the past 3 years we’ve regularly exceeded 5% revenue increase, and our NOI increases were north of that.  We’re projecting 2015 to be similar; some expenses are rising, but energy costs are going down.” 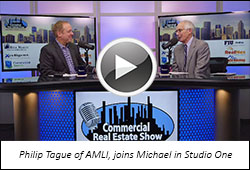 AMLI owns class A communities in nine cities around the country, including Houston. So far the fall in oil prices haven’t shown up in their numbers, but Phil notes they are watching it closely.

“In the past few years we’ve achieved 30-75% returns on development – something we’re very proud of, since the typical return is about 15%. Rents are going up 5% in a world of 2% inflation, and investors appreciate that. I don’t expect that kind of spread to continue, but the market has such strong fundamentals we remain quite optimistic.”

Investor demand is high, Tague noted, with plenty of opportunistic capital, plus the REITs who are adjusting their holdings, and lots of private US buyers plus a flood of foreign money. This means that business is good all around.

“Our firm continues to make a big bet on the health of this economy. We have over 3,000 units in production, representing over $2.5 billion in capital. We’re not alone; there is a lot of development around the country.

“This is driven by a few powerful key trends.  Millennials will continue to delay home buying. Investors find the low cost of money irresistible when you can grow high yields owning apartment housing. And the American economy appears to be healthy and stable.”

The modern apartment complex has changed. While it’s not the Jetson's, technology is everywhere: Bluetooth speakers and hi-speed internet in the walls, Nest-type thermostats. Accounts are managed, apartments are viewed and even leased, online. Quartz is king, granite is passé.

You’ll find unusual amenities like mini-bowling alleys, big screen TVs at poolside, and the return of the basketball court. There are wonderful spas – for dogs! Up to 65% of residents have pets.

“We’re also designing all of our communities to be Leed certified,” said Tague. “This isn’t an immediate demand from tenants, but as we go forward it’s becoming an obligation within the industry to be responsible. Everyone benefits from lower energy costs.”

With two million plus new jobs expected this year, demand is expected to remain robust. Each new job creates a household, and 35% of workers live in apartments. That’s 700,000 units required, well in excess of what’s in development.

Buckle up for another exciting “Year of Apartment Real Estate!”