Multifamily: Keep an Eye on the Horizon 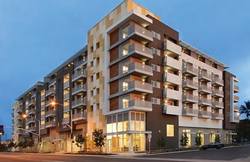 Nationally, vacancy is trending up slightly and rent growth is slowing, while new construction shows no signs of stopping. The multifamily market is like a perfect day at the beach. Even with a few clouds rolling in, there’s still plenty of time to enjoy the water.

Ryan Severino called the construction pipeline “the real risk to the apartment market” in the Q2 2016 REIS Preliminary Apartment Trends report. “Even in the face of a rising vacancy rate, it shows no sign of abating.”

Over the last 12 months the total number of units completed was 199,558. “With roughly 92,000 units built in the first six months of the year (before the likely forthcoming revision) 2016 is set to challenge records for construction figures, if not break them.”

Vacancy was unchanged at 4.5% in Q2 but Severino is quick to point out that this is simply due to rounding, as vacancy has been creeping back up since the low of 4.2% in Q2 of 2015.

Moving forward, new construction should continue to exceed net absorption but don’t forget we still have demand working in our favor. Severino said, “Demand will remain strong enough due to favorable demographics, which will prevent vacancy from rising too dramatically.”

ABODO’s July 2016 National Apartment Report said the renting market should remain robust if millennials create more than 2 million new households each year until 2025, as anticipated. REIS expects vacancy to rise by another 30-40 basis points for the balance of 2016 and rent growth to continue to slow to less than 4% annual growth rate by the end of the year. This is still very healthy growth historically.

“We expect year-end rent growth to be 3%-4% in most markets, likely beginning an upward trend later in the year or early next year,” said Axiometrics.

The ADOBO report does mention that the outlook for vacancy isn’t necessarily clear since many construction efforts are “proceeding cautiously or are on pause”, citing a Bloomberg article that references Pollack Shores Real Estate Group’s 12 story, 315-unit Buckhead development as one such project.

Atlanta is number 14 on the Top 25 Markets by Annual Effective Rent Growth for Q2 at 5.8%, reported Axiometrics. And in an op-ed for The Atlanta Business Chronicle, Mark Elliot, an attorney with Troutman Sanders LLP, speculated that we as a city are actually trying to talk ourselves into a real estate slump more than we are actually experiencing one. “In the ‘all-that-really-matters-department,’ we are still creating gobs of jobs in metro Atlanta, and attracting gobs of people. We continue to move up in important metrics (such as the cities with concentrations of ‘information jobs,’ where we rank 11th). All of the multifamily development must feel daunting to some, until you realize we have 100,000 more people in the metro area today. They can’t all live at Ponce City Market or in Edgewood indulging in a kale salad on their way to work.”

The ADOBO report also found that Atlanta had the 10th largest rental jump in the nation for 1-bedroom apartments with a 4% increase, as reported by The Atlanta Business Chronicle. Atlanta ranked 15th for annual asking and effective rent growth at 2.7% and 2.9% respectively, according to REIS.

Our take? Keep an eye on the horizon, but keep enjoying the beach.