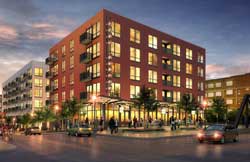 The darling of commercial real estate remains, well, darling. Nationwide, apartment rents continue to grow, and the sector maintains razor-thin vacancy rates. While new supply remains a concern in some markets, others are seeing a very healthy ratio of jobs created to new units being delivered. Investor demand continues apace, with bidders driving cap rates down as low as 3 percent for core assets in gateway cities.

The national occupancy rate of 94.4 percent is expected to remain steady even with new supply in the pipeline, McCleskey said. In 2014, approximately 159,000 units are slated for delivery. “New supply is going to peak in 2014, but it will slow a bit after because of rising construction costs,” she added. “We’ve heard from developers who had to turn down deals they were planning because construction costs are too high.”

Overbuilding is a concern in a few markets, such as Washington, D.C., McCleskey said. For 2014, 15,800 units are expected to come on-line, with only 0.1 percent job growth expected for the city. That’s 0.2 jobs for every new unit delivered in the metro area, she added. On the contrary, Houston is expected to add 81,000 jobs this year and only 16,100 new units, approximately five jobs for every unit being delivered.

Since the start of the recession, homeownership has declined from about 70 percent to less than 65 percent. Every time homeownership drops 1 percent, it creates 1.1 million rental households, said John Isakson, CIO of Preferred Apartment Communities. “The market has definitely benefitted from rental household creation with better renters and more stable tenants,” he added.

Demand has continued to improve during the last three years. “What’s more important is the shift in the quality of the renter pool,” says Mike Altman, CIO of Cortland Partners. “The average renter age is up 3.6 to approximately 37.7 years. They have a higher income, which improves our ability to move rents and the stability of the rent roll overall.”

Making sure that a property has good management is the key to its success, said Daniel Alexander, owner of AH Capital. AH Capital buys properties between Class B and Class C and views bringing on new management as part of the value-add opportunity.

Demand should remain strong, particularly with job growth still lagging, Altman said. “Nationwide, we only had 0.1 percent job growth in the first quarter, and people were expecting more like 1.2 percent. It’s constraining renters’ ability to move on to the next type of housing. Five years ago, renters stayed for two to three years. Today’s renters are staying three to five years.”

Multifamily demand continues to multiply.  “The investment market is very competitive with three or four times as many bidders,” Altman said. “There’s a lot of capital pushing to get into the space.”

Investors of all types, including private, institutional and foreign capital, are bidding on properties. “Cap rates for core properties in gateway cities are lower than 4 percent,” Isakson said.

In the last 12 months, financing for acquisitions has really opened up. “Banks are sitting on $2.5 trillion in excess reserves and have to place that money,” said Nicholas Halaris, owner of AH Capital. “Banks are calling and asking if we have properties today that would have been considered untouchable a few years ago.”

Low interest rates are part of the reason the multifamily market remains so attractive right now, Halaris said. “We view the interest rate environment as a shot clock—the lower the rates, the longer the shot clock,” he said. “As an investor, you have more time to figure out how you’re going to score.”

You’re invited to listen to the show audio on the multifamily market at the new website CREshow.com.