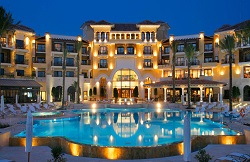 2015 was literally a record year for the U.S. lodging industry, specifically in terms of the overall occupancy level – at north of 66%, it’s at a record high. “The expectation is that not only will 2016 be another terrific year for U.S. hotels, but we should likely see good times for at least for another year beyond that,” said Mark Woodworth, President of PKF-CBRE Hotels, on a recent Commercial Real Estate show.

The hotel sector posted 42% growth in investment activity for 2015 on sales of $49B, according to Real Capital Analytics. 2015 also marked the six consecutive year of bottom line NOI increases in the double digits. The last time this happened was in the late 1930s, indicating that these are truly extraordinary times.

“The sale of individual assets grew 32% in 2015 with volume of $29B. 2015 marks the highest level we have ever seen for individual asset sales in the hotel sector, according to Real Capital Analytics. There was even higher growth for portfolio and entity level deals which increased 59% annually at a volume of $20.5B. The sales volume for these “mega-deals” is the second highest level for transaction volume of these types behind the 2007 peak.

Tom French, President of The Hospitality Group at Bull Realty, said that there is a misconception in the market that REITs are buying everything. "Ironically, of the top 20 sellers last year, most of them were REITs which is different than what people anticipate," he said. The buyers were a lot of institutional grade buyers as well, but what he found most interesting is that 4 of the top sellers were also 4 of the top buyers last year. "The REITs and the private equity groups are actually selling their properties," said French. The traditional non-REIT buyer is still buying about half of the product out there.

Deal volume for the full-service subtype came in at $35B in 2015, up 56% from a year earlier. With Blackstone’s $6B buyout of Strategic Hotels and Resorts, Inc. in December, it was actually mega-deals that moved the needle on the full service-subtype. Because of this particular deal, mega-deal volume grew 97% in 2015 on vol­ume of $14B. Without it, volume would still be up, but only 13% from 2014. Individual asset sales for the subtype were up 38% in 2015 with the $1.95B sale of the Waldorf Astoria leading the way, reported Real Capital Analytics.

Demand has been growing very nicely for 5-6 years now since the end of the Great Recession and supply growth has been below expectations, given the level of demand increase. The area where we haven’t seen as much real growth is in pricing. In fact, it wasn’t until Q3 of 2015 that average daily room rates (ADR) returned to the previous cyclical peak. So in this regard, it has been a slow recovery considering the record occupancy levels. Good news for investors: the mix between occupancy and ADR is decidedly in favor of ADR, which produces greater NOI growth. Supply growth is continuing to accelerate and Jack Corgel, Senior Advisor to PKF-CBRE Hotels and Professor at Cornell Univeristy, said he expects to see continued increases in ADR with slight increases in occupancy.

However, we can’t ignore the sharing economy. Robert Habeeb with First Hospitality Group said that the sharing economy is really becoming a big factor in the hotel industry. In 2010, less than 5% of consumers said that they have stayed in a shared accommodation and in 2015 that number is up to 30% and growing.  Deloitte’s 17th annual outlook report, Commercial Real Estate Redefined, lists the collaborative economy as a theme they “believe will result in significant disruption for the CRE industry over the next decade.”

For the hospitality sector, it all comes down to Airbnb. “You see a real acceptance by consumers of sites like Airbnb and a willingness to stand private accommodation rather than the hotels and that clearly will have an impact in our business as time goes on. We as an industry are really pushing back on this model because it's unlicensed, unregulated, untaxed and we feel it presents an unfair playing field for hotels and as that segment of the economy keeps growing with what you see a fairly significant impact on the performance eventually,” said Habeeb.

Woodworth agreed that the awareness of that option is growing exponentially but pointed out that the record conditions in the U.S. lodging industry are truly remarkable given the sharing economy and specifically Airbnb’s phenomenal growth over last three or four years.

Corgel concludes that a rise in interest rates effect on value isn’t as highly sensitive as one would think. He did an analysis using hotel cap rate data going back into the 90s and found that a 150 basis point increase in the nominal interest rate (the 10 -Year Treasury), would generate about a 50 basis point increase in the hotel cap rate.  The nominal interest rateis comprised of two parts: real rate and expected inflation. With low expected inflation, any increase in the rate is going to be attributable to real interest rate movements and we’re below the long-run average on that. The cap rate is a much more complicated entity in the sense that there's an NOI growth built-in, and there's risk premiums in the real estate markets built-in. So even though nominal interest rates are the most important component of cap rates, the expectation is that NOI growth is going to continue to be attractive, and strong bottom-line profit lift will offset any decrease in value.

Certain parts of Atlanta are booming. The Georgia 400 N. corridor has some hotel projects that are coming in there and we think that there's room for even more. There’s also a lot of interest in the Atlanta airport and categorically we seen a lot of interest in airports around the country for new development activities. PKF-CBRE has been working closely with the Georgia World Congress Center, as they're very interested in establishing some form of a public-private entity to help stimulate the development of a new hotel right there at the convention center. Again, we’re seeing lots of that kind of activity around the country.