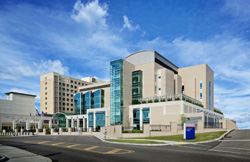 Healthcare real estate is a relatively small and specialized niche, but it’s very active, rapidly evolving in response to major changes in population, regulation and the economy. While the healthcare industry is responsible for nearly 18% of GDP, the sector contributed just over 6% of commercial real estate activity in second quarter 2014.

Still, investor interest is high, and there are deals to be made in this intriguing market.

The Impact of ‘Obamacare’

The major regulatory changes delivered by the Affordable Care Act (ACA), paired with the advance of the Boomer generation into retirement age, is, in effect, reengineering the healthcare real estate scene. The uncertainty that preceded the rollout of ACA and this first year of implementation have rippled through the market, creating waves of anticipation, planning and transactions, with some profound effects.

To get some insight into this unique market in transition, I consulted a number of experts, including John Sweet of Physician’s Realty Trust, a medical office REIT that has acquired over forty medical office buildings (MOBs), ambulatory surgical centers and specialty hospitals over the past 14 months.

He noted that before ‘Obamacare’ began enrolling subscribers, high anxiety among private practice physicians prompted many to sell their real estate holdings. Some of these doctors were cashing out as they neared retirement. Others sold and took leaseback from the investors.

Now, he said, with just six months of data in on the new law, the early impact on medical practices seems to be less than feared. Still, uncertainty runs high. According to a recent poll, nearly 40% of physicians are deeply concerned about the impact of the law on their bottom line, while only 6% report a negative effect

The ACA is expected to drive up the number of patients for doctors in general, and will benefit the ‘family doctor’ most of all, says Sweet. That’s because general practitioners are incentivized to act as gatekeeper for specialists and procedures.  Most specialists will continue to thrive due to plenty of demand, but imaging and lab services may get squeezed by cost cutting efforts.

It’s unclear what these changes will mean for square footage per patient, though, since the number of doctors isn’t affected.

“Adding up to 30 million more insured didn’t create more doctors.” Swann pointed out. The average age of a physician is fifty-five. He cautioned we are heading into increasing doctor shortages nationwide, and that will certainly limit the demand for traditional medical office space.

Investors are definitely bullish on buying and building MOBs. Demand for medical space is always significant, but highly variable; influenced by changes in population and economic conditions, regionally and locally.

As medical buildings become outdated, and retrofit costs prove too high, building a new facility might make the most sense. The ACA and the aging population are creating high demand for facilities that support the most cost-effective care. In many cases that means newly designed replacement buildings.

To explore the growth of new healthcare development I spoke with Henry Johnson, Chief Strategy Officer of Freese Johnson, a firm that designs and builds specialized facilities for healthcare systems, hospitals, and practice groups.

“Outpatient clinics are the biggest demand right now. “ Henry reported. “They cost at least 1/3 to 1/5 less than hospitals.”

Johnson reported that major healthcare systems are now developing along a ‘hub and spoke’ system, distributing services out into the community.  Moving patients out of the hospital into highly efficient modern ambulatory outpatient centers keeps the most critically ill people, such as the cancer and cardiac care, in the most expensive real estate.

The newest centers are also being located to serve the largest numbers of private pay clients. There’s also demand for specialized facilities like sports medicine, rehab and training clinics, and ‘boutique hospitals’ in upscale markets.

As these ‘spoke’ properties move into a more retail setting, the trend is also to adopt a more retail strategy.  It’s no longer unusual to refer to patients as ‘customers’. A good example is the Recovery Center designed to accommodate joint replacement care: these often include more hotel-like lodgings for rehabilitation.

While the impact of ACA is yet to be completely understood, business is good for Johnson’s firm, which has twice as many projects as last year. The southeast US has over $2 billion of new medical facility construction planned for 2015-16.

With all this demand, construction costs are rising for both human and material resources, but competition for talent is the biggest concern. The best architects and engineers are in hot demand for healthcare development, just like they are in apartments and other sectors.

The sales market for medical real estate began the year behind the swift pace of 2013, but picked up steam in the second quarter, according to Paul Zeman, President, National Healthcare Capital Markets Group, and partner with Bull Realty.

Investment sales volume in second quarter was $1.6 billion nationwide. Medical is such a lively sector, but it’s small: only 4% of total office sector, which sold $28 billion over the same period.

“We continue to see high demand for medical,” says Zeman.   “Due to telework and flex space, square footage per employee is shrinking in the standard office market. Not so for medical; if anything, facilities may be getting larger to accommodate more patients.”

Cap rates can vary greatly with market, submarket, building, tenant credit and lease term.  Generally, for an institutional quality investment property (valued greater than $5m) Cap rates are in the low 7%s to 7.25% average, a bit higher than for the regular office sector.

Medical property valuation is an intricate process and a balancing act, says Zeman.

For instance, an on-campus trophy property with long-term hospital lease can trade at a low 6 Cap. A less ideal location with individual tenants can look like a very different scenario.

How the original entity is setup and the lease structures are essential keys to a property’s ultimate value at disposition. This can affect the valuation in the millions.  Paul wanted to make this very clear. Do not wait to call your MOB sales broker until you want to sell!  “It’s never too late,” he laughed, “but if you plan to sell within the next five years, don’t hesitate to call me today.  It helps to plan your exit from the very beginning.”

A lot of savvy investors think it’s a good time to sell, considering what interest rates could do next year. There are buyers out there. Investors are very bullish!  Zeman says he sees a severe need to deploy capital from institutional investors.  But with the unique factors of the changing medical market, it’s important to take to look at the individual situation.  And, as noted, with medical real estate, and exit plan is even more consequential than with other property types.

Lenders feel good about the medical sector. Healthcare is not an industry that fluctuates with the economy -- there is always a constant need. Hospitals and healthcare systems sign bigger leases than most businesses and they have great credit.

Therefore, loans are readily available. The Small Business Administration will lend up to 90% loan-to-value to doctors and practices. Much more common are investor loans at 75% or 80% LTV from traditional sources. Rates are still great:  from low 4% to mid 5%, in some cases lower.  Short-term loans are readily available for 15-18 month construction loans at the Libor rate plus 1.5 – 2%

The big healthcare systems still own 80-85% of their assets, and may see fit to monetize those assets going forward. The new laws demand more investment in HC information systems, and cost containment will continue to be challenging. Since the industry is sitting on an enormous resource, one that can also benefit investors, we may see this begin to change.

More property owners may decide to sell while rates are low and investor demand is high. This could cause sales volume to increase slightly. Cap rates on the best properties may compress slightly. The best risk adjusted yield opportunities may be acquiring off campus hospital sponsored assets in the close in suburbs.

The medical sector is a lively business with its own distinctive issues. It’s feisty and competitive, and although dwarfed by the larger office sector, a unique world that will always be necessary.

Michael Bull, CCIM, is the host of the Commercial Real Estate Show heard on 40 radio stations around the country and CEO of Bull Realty, Inc., a U.S. commercial real estate sales, leasing and advisory firm headquartered in Atlanta. Michael on Twitter and LinkedIn.