The FASB lease accounting changes on the horizon may impact how companies make real estate decisions and the commercial real estate industry overall, especially the investment market. On a recent Commercial Real Estate Show, I spoke with two experts on the matter who have been working on the project for the past five years: Alan Bushell, Founder of ProCalc and Co-Founder of ProLease,  an industry standard lease analysis and lease administration software, and Bill Bosco, President of Leasing 101, a consultant to the leasing industry.

In the history of commercial real estate, operating leases have never been on the balance sheet, they’ve always been reported in the footnotes to the balance sheet. Approximately 10 years ago, the SEC mandated from the FASB and IASB that we put operating leases on the balance sheet. The purpose of this change is to get a true representation of the future liabilities of companies. The project is expected to be signed off on in January 2016 with implementation for public companies starting in 2019 however, they will be required to show 3 years of P & L and 2 years of balance sheets.  This means that any leases on your books in January 2017 will have to be capitalized. So the time to consider the impact is now!

To put a lease on the balance sheet means to capitalize it.  “So there's going to be a lease liability which represents your obligation to pay future rents and there will be an asset that is your right to use the space (Right Of Use or “ROU” Asset). They will both start out valued at the PV of the rent to be capitalized.  The asset and liability values are amortized on the balance sheet while the lease cost is the straight line average rent expense.   It is a complicated process and there's a lot that goes into it,” said Bushell.

The short version is that new leases you are signing today as well as leases that are already on your books will have to be capitalized. Any lease that's on your books now that expires after January 2019 (for calendar year companies) has to be restated in your financial statements to show the effect of the new rules in every period that you present in your financial statements.

This affects all companies that have to prepare audited financial statements and the most impacted companies are the ones whose lease profile is heavy real estate leasing. Retailers comprise 15 out of the top 30 companies that lease the most in terms of reported footnoted lease payments. Some of the most notable ones are Walgreens, CVS, and McDonald’s. Some of the companies are going to be affected tremendously depending upon the nature of their leases and their propensity to lease. For example, Walgreens is going to have to have a 57% increase in assets, as opposed to CVS which only has a 23% increase in assets.

It is important to note that over the course of this worldwide project, FASB and the IASB have disagreed a number of times on how it's going to be done. For example, Bosco mentioned that the FASB in the U.S. broke away from the decisions made by IASB in the area of lessee accounting. The IASB decided that all leases are the same: that they create assets, the right to use property, and they create liabilities, the  obligation to pay rent. The FASB stuck with the current risks and rewards framework, which says some leases are actually financed purchases, (which are known as capital leases now), and some leases are operating leases, (like most real estate leases). “The fact that FASB stayed with that framework is good news for the U.S. because the change will just be capitalizing operating leases as non-debt “operating” liabilities and the P&L cost is the straight line average rent.  As a result the new accounting is not going to violate debt covenants, it's not going to change a lot of your financial ratios, whereas the IASB version is not such a good outcome,” said Bosco. 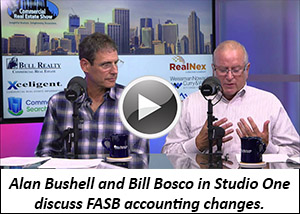 From a real estate perspective you're much better off being a FASB company, (which means a U.S. company), than an IASB company because ratios like gross margin, operating expense ratio, debt-to-equity ratio, and return on equity don't change at all. However, return on assets (a very important measure) is going to get worse for FASB and IASB companies because there more assets, the same amount of return, also the quick ratio and current ratio are going to be worse because there’s an added liability and no added current asset (these ratios are not critical).  For IASB companies many more ratios are negatively impacted.

What Do You Need to Know?

The key is to understand what affects the capitalization of a lease and how to capitalize a lease. Bushell’s software company has functionality built in to let you start to capitalize leases. He breaks the process down into seven pieces of information that you need to understand:

4.       The deductions that you can take in your rent. The goal is to capitalize the least amount of rent possible so it is very important to understand all the deductions that you can get. Any portion of the rent that you receive a service for, you are entitled to deduct from the rent to be capitalized. Examples of that would be in a gross deal where you have a base year for operating expenses, you can deduct the base operating expenses every year. Or if you have a full-service deal, that includes utilities and electric costs, you can deduct these items from the rent to be capitalized, hence making your balance sheet look better.

6.       Initial direct costs: Any cost paid by the tenant to a third-party directly related to the negotiation of the lease. Examples of this are legal fees, brokerage commissions, consulting fees, payments made to another tenant to get them out of space etc.

7.       Impairment credits: Anytime the asset value is less than what you're carrying it for on your books. In real estate, the best example is if you were to be subleasing space at a loss that would constitute an impairment credit.

What Does It All Mean?

So what does this mean for the commercial real estate industry? The way we negotiate deals in the future is going to change as we will want to minimize the amount that gets capitalized!.

1.       “I think we are going to see a change in the way deals are negotiated in that tenants are going to want landlords to bifurcate any possible services out of the rent,” said Bushell. (The reason for this is to capitalize the least amount of rent possible).

2.       “Now there is going to be a detriment to having a bargain or compelling renewal option.” In the past, a tenant would almost always take a renewal option because it didn’t cost anything. Bushell gives an example, “Suppose you have a 10 year deal with a five-year renewal option. If there is an economic incentive or compulsion to exercise that option you're going to have to include that in your capitalization schedule. So no longer are you capitalizing 10 years of rent but 15 years of rent and you have to know this 10 years in advance.” One of the ways that you can get around this is by negotiating rights of first refusal (ROFR) instead of negotiating renewal options, which in essence gives the tenant the same thing. This concept has not passed the test of any auditors as of yet but it is a creative concept that may work. Once these new rules are signed and put into place, the thresholds and boundaries will become clearer. Time will tell.  The other “way out” is to make sure that renewals do not represent a bargain or are compelling to renew.

3.       Another way deal structures could change would be in the area of real estate taxes.As mentioned previously, you're allowed to deduct any rent that you receive a service for from the rent to be capitalized and again, your goal is to capitalize the least amount of rent possible. We also talked before about operating charges and if you have a base year for operating your property that you are able to deduct the base amount. However, real estate taxes don't work quite the same way. Although you are receiving a service for the real estate taxes, the problem is that the service is not directly related to the space that you are leasing. So the boards have said you are really just reimbursing the landlord for his expenses. This means you cannot deduct real estate tax base amounts in a gross deal. We can keep a gross deal for operating expenses.“But for real estate taxes, you’re going to want to negotiate a net deal. Break them out.” The language in the lease has to say that you will pay your proportionate share of all of the real estate taxes that are due based on your proportionate share of the building, completely separate from base rent.

4.       Lease escalations: “You may want to negotiate a CPI deal over an escalating rent deal because it will reduce the amount that’s capitalized.” Any contractual rent at lease commencement is going to be capitalized in the capitalization calculation, but CPI increases would not be capitalized because increases in rent are variable and unknown at commencement to be determined by future changes in CPI. The increases in rent caused by increases in the CPI are accounted for on a cash basis when they occur.  So a CPI deal means less assets capitalized, deferred P&L costs, and is cheaper on the front side.  The business risk is that CPI increases are higher than expected.

To the tenants and real estate brokers who say, “I don’t want to learn about accounting.” Get ready.