Where are we in this cycle? Some think it’s gone a bit long in the tooth. Interest rates are headed up, yet demand is still huge. Where are we going? It’s time to ask some CRE experts. On a recent show, I spoke with Larry Souza, Todd Kuhlman and Mitch Roschelle.

Larry Souza, Investment Economist for Monetarex, reminds us that 80% of institutional capital is focused on class A property in the top 10 markets like New York, Boston, Seattle, San Francisco, and Los Angeles, which anchor our industry.

There’s plenty of money out there, Souza says, not only pent-up in institutions, but also massive capital flows from troubled economies abroad. Brazil and Argentina are struggling, China is decelerating and Europe teeters on the edge of recession, so foreign investors are stashing their money here for stability.

All of the conversion of foreign currency to dollars is propping up the U.S. dollar and the bond market.  The number one place to put capital is in U.S. commercial real estate, at least for the next two years.

We’re now seeing prices that exceed the 2006-07 peaks. Right now high capital flow is providing positive pressure, but the interest rate cycle initiated by the Fed  is what will trigger a correction in pricing. He suspects they will keep rates low through election season, but after that, rates will rise.

The standard-bearer 10-year Treasury-note will be 3% by 2017, says Souza. Maybe even 4% by 2018. The Fed will keep pushing rates until they achieve their goal: 3% GDP growth, the point where the economy is considered to be growing sufficiently.

We’ve experienced recession in the first half of every single decade since WW2.  Souza advises taking tactical maneuvers, reallocating portfolios defensively to prepare for mid-cycle correction of 2018. He’s also concerned about a more severe recession in 2021-23. That one could mean pricing correct up to 40%. Back in 2007-10 we saw pricing on lower quality assets drop by 50%. His big concern is sovereign defaults are going to be the trigger.

“If you look at the majority of the emerging market economies, currently, their debt-to-GDP ratios are in the 100-150-250 range.” That means the sovereigns don’t have the tax revenues to pay the debt service. That means they will default passing right through to pension funds and banks thereby creating a recession

Between the unstable world economy and rising interest rates, it might be time to prepare for some bumpy years.

Todd Kuhlmann, CCIM and CEO of CRE Tech also has on opinion about the state of things. Back in August 2007, Kuhlmann noticed that certain key credit markets on Wall Street suddenly stopped lending, and properly deduced that we were about to get a big correction. He uploaded a video warning about an impending correction. At the time our business was soaring. It took a year before it hit home, but Kuhlman saw the beginning. He thinks we a in a similar situation today.

“The good thing about real estate is you can always see it coming,” Kuhlmann assured us. “You just have to follow the cycles. These swings aren’t a bad thing; this is how we make our money in real estate. Stay in front of the curve and you’ll be fine.”

Right now we are at 120% above the pricing we saw right before the correction occurred. It’s not necessarily a bad thing. It’s a typical market cycle.

In Austin, technology really drives our local economy. Kuhlman urges us to keep an eye on technology and the venture cap that drives demand.  Is it flowing or slowing? Next I look at the influx of capital from abroad. Remember that international investors don’t expect returns the way we do, but are looking for preservation of capital.”

Multiple variables are at play. It’s important to watch the demand balance against the interest rates. Our business is still plugging away. While some secondary and tertiary markets are just beginning their recovery, other markets have been strong for 5-6 years. The pricing adjustments will begin when interest rates go up.

What About Exit Caps?

Working with institutional investors, we’re seeing them start to do up-front analysis of exit cap rates increasing the rate as the years go on. We’re expecting 1% per year cap rate climb. And as you know, if cap rates go up, and NOI stays the same, then prices go down.

Mitch Roschelle, senior analyst with PwC, looks at the big picture and the long game.  Go back to the Lincoln administration, he suggests, and notice how the boom/bust market cycles considerably more slowly than it once did. From the mid 1800s–WW2 there were 22 cycles, yet from 1945–2009 we have had only 11 complete cycles. Currently we’re 76 months in on this one.

It’s All in the Game

“’What inning are we in?’ I am often asked. It’s a double-header and we’re at the beer-and-restroom break between games. We won the first game, but it’s not clear we’re going to win the next one.”

“This will last for a while,” Roschelle assured us. “The fundamentals are strong and nothing is really overheating.”

Looking back over the last four cycles, two of the busts were caused by the real estate industry. Arguably, the 80’s S & L crisis was caused by deregulation of lending, which led to crazy overbuilding, and encouraged by a tax code that rewarded taking real estate risk. The most recent financial crisis spawned an abundance of regulation, which reined in lending quite severely. This has served to keep volumes down and not re-inflate a bubble. It’s put us in a good place, he says, because we haven’t overbuilt.

According to Roschelle, it’s all up to how investors feel about interest rates.

“In this year’s Emerging Trends market survey when we asked CRE professionals about their expectations for the year ahead, 84% stated that the outlook for profitability is good-to-excellent, (identical to 2006)” Roschelle explained. “The same percentage expect interest rates to rise. So, they expect rate hikes, AND are still optimistic. Sounds like interest rate hikes are already getting baked in.”

Beyond 2016, the question is: how quickly will the Fed move? If the raises are 25 basis points at a time, this shouldn’t be a big deal. Anything greater than that could be a problem.

Apartments: Looking at the fundamentals, there are 3.5 million Americans (many who are millennials) who are in the traditional household formation stage we haven’t built new houses for them. Comparison of housing starts to household formations. With that robust demand, As a result we’re building rental product faster than single-family product. Argues against bubble. 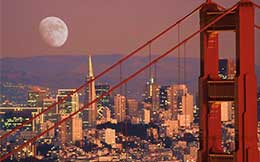 For example, historically San Francisco has a 2–3% growth in apartment inventory.  Currently the US average growth is 3.6%, but San Francisco is adding units at the rate of 7.4%, a historic high.

More significantly, rent as proportion of household income is climbing. In the City by the Bay it’s nearly 31%, compared to the national average of 21%.  Only class A stock gets built, and demand is driving up rents across the board.

San Francisco is on bubble-watch, said Roschelle. The city is so dependent on the tech economy that any hiccup in that business will have a big impact. The cost of living, as well as doing business, is becoming a factor. 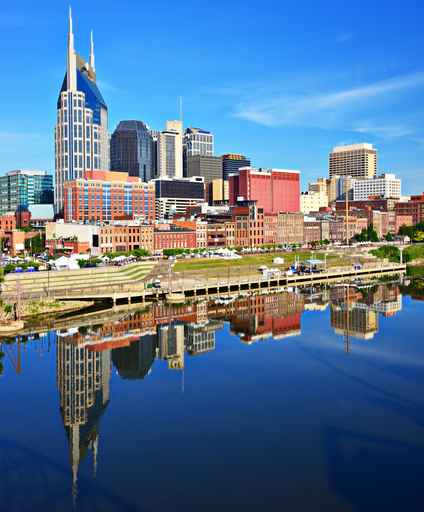 By comparison, Nashville is adding new apartments at the rate of 7.6% but their percentage of rent-to-income is only 17%. This yields a very affordable cost of living, and cost of doing business. That combination will sustain Nashville’s economy long term.

This makes office fundamentals look strong; rent nationwide is expected to grow in the 3.0% range. The only counter-influence is the downsizing trend. Office space-per-employee is declining, heading for 150 square feet, where it was at 250sf only ten years ago.

Low Caps: Paying Too Much?

Demand is high, we haven’t seen much construction, and office is expecting excellent rent growth. This scenario justifies the low cap rates.

There is a myth that the low cost of money is driving investors to pay too much. Roschelle debunks this:

You do get a little dividend from borrowing at a low rate, but we’re not seeing cap rate compression without the income growth needed to sustain the investment.

And it’s proving out over all the sectors: Industrial has rent growth in the 5% range, multifamily rent growth year-over-year justifies the cap rate compression that investors are paying. Roschelle doesn’t see an interest rate phenomenon exclusively but asks But what happened if rates go up significantly? Is there enough wind in the sails. He says yes.

2016 and beyond may be the years when smaller markets get their due, in a good way. Investors chasing yield will follow the businesses and people. The big Gateways will move out of the top 10 as smaller markets move in and investors look for strong fundamentals in more vital markets.

To continue the baseball analogy, it’s early innings in Nashville, but later in the game for San Francisco